What Is Light Pollution?

We are familiar with the term of air, water, and land pollution, however do we know that light can also become a pollutant?

Light pollution or photopollution, is an anthropogenic light at night. This is happens as a result of excessive light emission and incorrect lighting directivity and placement. Without realizing, the light pollution can affect human’s health, disrupt the ecosystem and disturb the night view. Following are light pollution components:

• Skyglow – illuminates the night sky above the occupied area

• Clutter – grouping of over bright, confusing, and excessive light sources 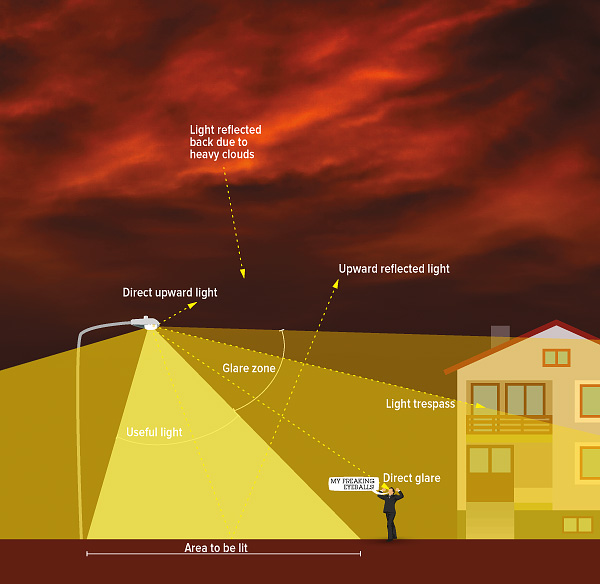 Image above illustrates various components of light pollution and what kind of lighting design is “good”. (Image by Anezka Gocova, in “The Night Issue”, Alternative Journal 39: 5 (2013).

Light pollution is a result of increasingly rapid industrial development. Sources of light pollution include the construction of exterior and interior lighting, advertising, commercial property, offices, factories, up to street lights or parks.

In fact, a lot of outdoor lighting used at night is inefficient, too bright, not directed properly, is not properly covered and emits excessive light. So it is not only light pollution matter but also it is a waste of energy.

What are the negative effects caused by light pollution?

Before light bulb was invented, life on Earth made use of natural light such as sun, moon, stars as well as fire. Now with various types of artificial lights, darkness is no longer a problem at night, but the excessive light emission produced by artificial lights has a negative impact including:

Without realizing light pollution affects the behavior and lives of all people, fortunately awareness of the negative effects caused by light pollution is increasing. There are many community groups such as scientists, environmentalists, architects, building owners and governments who strive to minimize light pollution.

How to reduce light pollution?

What we can do is to “reduce light pollution“, mentioned in Building Physics as:

By using lamps efficiently, at least in our own neighborhood, will not only help to reduce light pollution, but also help the earth and the sky to goes on as how they intended to be. There is no too small contribution to make a better sky. “Use your power to make change a reality”