On March 20, 2010 Angklung Group from SMAN 3 Bandung or often called KPA3 held the Eighth Angklung Orchestra Concert. This concert titled Tapestry of Beauty – Presenting Maestros from All Around the World. In accordance with to the theme, this concert presents songs – beautiful songs composed by world’s greatest composers and composers from Indonesia. KPA3 expect this concert can be one of the prime appearance to show the results of their innovation for over 30 years.

Their purpose is to hold a concert in the Aula Simfonia Jakarta so that the audience can enjoy the original sound without the help of electronic amplifying the angklung such as microphone, amplifier and speakers. Because so far, they are not too satisfied with the quality of the acoustics in the theater where they performed before. The acoustic quality of buildings that are below average can cause the angklung performance be a very difficult show to be enjoyed by the audience.

In discussing the technical background sound source or angklung orchestration design I use music from a technical reference book Introduction to Materials and Structure of Music by William and Richard DeLone.

According to the above mentioned four categorization of musical instruments, namely: Strings, woodwinds, Percussion and Electronics. While the instrument contained in this orchestra are: angklung, contra bass, bass drum, snare drum, timpani, xylophone, bell lyra, Castanet and triangle.

Angklung is a traditional musical instrument of West Java which is made of bamboo. The Sound on angklung occurs because the air in the cavity resonance of bamboo due to the impact. Tone (pitch) that occurred in angklung is determined by the short length and large diameter bamboo.

The sound duration of angklung is obtained from the long or short angklung swings . While the strength or weakness (loudness) angklung sounds obtained from strong or weak angklung shaken. From a technical way of sounding the angklung musical instrument can be categorized into groups of percussion instruments.

Bass Violin or what we often refer to as contra bass. According to the Dictionary The Concise Oxford Dictionary of Music naming naming contra bass is not appropriate because the definition is the correct contra bass music game is played one octave lower.
Bass Violin often referred to as “viola da gamba” or fiddle-footed as it has legs and played with the feet. Bass violin included in the category of musical instrument strings.

To fill layer percussion or rhythm angklung orchestra is put musical instruments bass drum, snare drum, hi hat, cymbals and timpani. The musical instruments included in the drum family. Bass drum, snare drum and timpani is made with leather in the stretch above the hollow body is made of wood or metal. While hihat and cymbals made of metal circular.

Triangle is atonal percussion instruments made of metal. As the name implies this instrument and how to play a triangular clubbed with a bat. Triangle is used by composers to provide confirmation of a musical phrase.

According to the book Introduction to materials and structure of music definition of musical texture is the interaction among several instruments that are arranged in layers tertentuk music games like layer melody, chord layer, layer layer bass and percussion. Besides the texture is also determined by the quantity and quality aspects. Aspects related to the quantity of the number of musical instruments in a group and the quality aspects regarding the timbre of musical instruments. The combination of these two aspects to sound monophonic, homophonic or polyphonic.

If we analyze the quality aspect of this angklung orchestration then we can see that almost all the existing instruments, including the family of percussion instruments. One – the only means of music of different categories are included in the bass violin family of string music instrument.

The concert was divided into three parts. The first section displays the results of the classical music world composers such as Beethoven, Dvorak, Strauss and others. Then the second part featuring modern classical works of John William, Andrew Lloyd Webber and Verdi. And the last is the third section that showcases the music of composers such as Eros Jarot Indonesia and thunder Sukarno Son. The first session of this concert in konduk by Djiwa Tanuwijaya MD while the second and third parts dikonduk by Miriam Wedyawari. 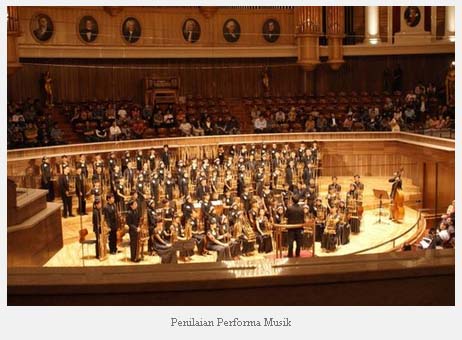 The concert opened with Karl Jenkins Palladio song with music tempo Allegretto or in Indonesian means rather quickly. This song is composed of several layers arrangement. The first layer is the primary melody along with harmonious melodies played by a musical instrument angklung. The second layer is a layer chord played by a musical instrument angklung. The third layer is the layer that is filled by the bass violin bass. The fourth layer is a layer filled by the percussive bass drum, snare drum and triangle.

Layer melody in this song played by angklung one octave lower than the original composition of this song. This causes the layer tone melody is often attached to the chord tone. This makes me somewhat difficult to distinguish sounds layer melody and chord sound layer.

The second thing is the tempo and rhythm of the game that sometimes hearing less compact and less heave in accordance with the direction of the conductor.

Texture music or combinations of timbre of the instruments on this concert is still lacking match. Such as a bass drum sound that is not in tune with the angklung. Then when the angklung concert collaboration with tenor and soprano sound of music and the vocal sounds less well integrated.

Analysis and Evaluation of the Room

Aula Simfonia Jakarta started to built in 2004 and was completed in 2009. The building was built in this art was designed by pastor Stephen Tong in order that Indonesia is able to organize concerts of classical music class international. Simfonia hall has a capacity of as many as 1,227 seats or 1,400 people following the musicians on the stage. Design architecture Aula Simfonia Jakarta the Renaissance style with wood color, white and gold.

Here is a plan seating area which consists of two levels, namely the ground floor and a balcony. The figure below is a picture of the layout of the seating on the ground floor.

Furthermore, the following image is a picture of the layout of the seating on the balcony which distribution is the front balcony, rear balcony, balcony left wing, right wing balcony and seating in front of the stage.

Tickets are sold divided into four price tailored to where to sit. The price of the most expensive ticket is the ticket balcony in front of the stage. Followed by a left-right-wing balcony. This was followed by a seated position on the ground floor facing the stage. Prices for the cheapest was sitting on the balcony located at the rear of the stage.

Stage
In the picture below we can see the stage set in the middle of white rooms with wood material.

Furthermore apibila we look up, we can see that the wall is divided into two parts. The bottom wall brown with synthetic wood material. While the upper walls are white, with a niche containing red absorber panel. In front of each niche there are statues and paintings of world renowned composer with stone material.

Finally we come to the part of the sky – the sky is made recessed rectangular with steps three levels. The top of the white ceiling made of gypsum, while at the bottom of the ceiling is made of wood brown. The gap between the wood and gypsum are holes – holes to distribute the flow to use for air conditioning.

Acoustic Quality Assessment for angklung concert is based with my seating position which is located behind the stage. My assessment is subject to change if I sit in a different place and a different musical performances.

Parameter noise in the concert hall I value quite qualify. The assessment is based on my observations of noise caused by air condition duct barely audible, interference noise from outside the room also did not sound when the concert took place.

Listening Level in a sitting position where I sat sounded very good. I could listen to each – each instrument with a high enough level. Unfortunately angklung musical performances on a concert is nothing to show music with extreme differences in dynamics. So I can not pass judgment on a listening level lows and highs.

Intimacy or the time difference between the direct sound to the sound of early reflections. Sound angklung ensemble played with a rather long duration sounds like mumbling. This may occur because of the sound of angklung and early sound reflections piled around the stage.

Spaciousness is the sensation caused by differences in initial reflection sound heard by the left ear and right ear. Spaciousness in my sitting position is not too pronounced.

Envelopment is the difference reverberation chamber received by the left and right ears. Envelopment in this room is also less pronounced.

Blending between the sound of music in this room there was less attractive because of reverberation parameters were minimal and rather short and direct sound and early reflection is dominant.

Aula Simfonia Jakarta has acoustic character dominated by direct sound and early reflections. As for the sound reverberation parameter was minimal and somewhat short with tonality rooms tend to be bright.

With Orchestration capabilities Angklung KPA3 play music compositions are quite complicated it can be said that Orchestration orchestration angklung Angklung KPA3 is the best in Indonesia. It’s just that there are some things that need to be rectified as a more harmonious musical texture and training to achieve timing rhythm of the music that is more compact and floated.

For information and consultation, please fill out the form below or contact us at: