Understanding the Process and Environment of Music Studio

Music studios must provide devices to perform the music production process. Except for home music studios, it does not have to have complete production equipment like a music studio in general. In addition, the music studio can also be one of the backbone industries that support the art of entertainment, which includes the activities of vocal recording, acoustic musical acting activities, and electronic musical instruments.

Electronic energy in the form of audio signals may be analog or digital format. The audio signal is then transmitted over a regular cable, optical cable. Or wireless. The stored signal can be played, edited, or combined with other recording signals until the desired end result by the music producer. Upon completion, the final recording result is mastered and then duplicated for publication or commercial purposes. Music material duplications can be compact discs, phonographs, blu-ray, or downloadable digital files.

The common sense of a music studio is the space where musicians play music, sounds recorded and edited. In general, the music studio has two parts, namely a take room where the sound of musicians and vocalists are played and captured by a microphone. Then, the control room is the place where a sound engineer records the game of musician and vocalist which is then stored, edited, polished, mixed, played back, and processed mastering.

There are various types of studio music sizes, ranging from home music studios with a capacity of no more than eight people up to a scoring stage that can accommodate all major symphony orchestra musicians. In a home music studio, there may be only mix boards and other electronic devices in one room with musicians and sound engineers. In the studio facilities are being and with separate room functions, in turn will be divided between the music studio and control room. Figure 1 shows the basic design for several types of music studios.

Regardless of size and without exception, all music studios generally have the same needs. There may be a music studio or home music studio that specializes in its needs. Can also be seen in terms of acoustic and functional needs. A summary of those needs is commonly listed in Table 1 below. Some of these are natural acoustic requirements, while others are requirements on a functional basis.

How to Design a Home Music Studio

Home music studios or sometimes called studio projects, are now increasingly common and mushrooming everywhere. Due to the high quality recording equipment is now getting smaller shape and digital format. The equipment can be obtained with a much more affordable price compared with several decades ago. The sophistication of these electronic devices has a direct influence on the rapid development of the number of home music studios. Excellent recording quality can now be made at an affordable cost.
Choosing a location that provides natural sound insulation is a good first step. If a basement or basement is available, it is probably the best option; Or a separate room structure that can be used. That is the structure of a separate room is a room that is not attached to another room or a main house far from other homes.

Figure 2 presents a design example for a private studio, built into a stand-alone garage. This illustrates some of the difficulties in making a successful conversion. This layout is quite personal and reflects the user’s work habits. In this example, the operator can mix and arrange it on a keyboard that serves as a Musical Instrument Digital Interface (MIDI), a controller connected to a computer so that some musicians can be accommodated for a recording session. 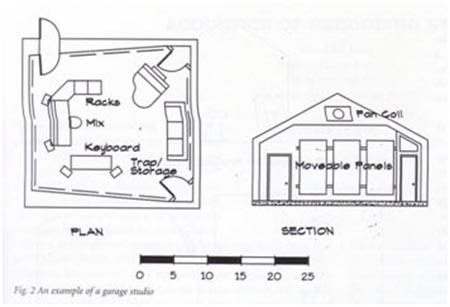 How to Design a Music Studio

Formal music studios consist in one or more rooms, where music is played and recorded. All musicians can be at the same time or they may not be staring at each other. With the ability to send music recordings from one place to another electronically, musicians can perform in different rooms with great distances and at different times. When a musician plays simultaneously in a separate room, what is desired is to separate the instrument so that it does not enter into another microphone. A simple insulation or insulation chamber can also help in separating the studio into different acoustic environments.

Music studio can be used for public or private and based on user requirement. Figure 3 shows the floor plan for the main studio and control room. Therefore, most of the composition work is done on the keyboard with a digital mix board. In fact, in three workstations, each with just a keyboard, mix board, and a computer arranged along the front and side walls of the control room.

In the scope of a music studio, there is also a matter of echoes. The echoes of the music studio include several spaces accessed from the mini-lobby separating the music studio from the control room. These lobbies can sometimes be used as isolation spaces in particular if there is a need for feedback, for example with an electric guitar. Two isolation booths, with sliding glass doors, are valiable for individual instruments, such as piano or vocals.

Silencers also contribute to the quality of music studios. Walls and ceilings made of several layers of drywall with the completion of wood panels can be mounted on the ceiling as a silencer. Square-plated silencers are hung with hooks on the wall and can be moved or folded to expand the space. Also, useful to overcome the hum frequency. The mid frequency time of echo is about 1.2 seconds and flat with frequency. Figure 4 shows the exact echo time range for a music studio.

The bass trap is performed using an air plenum built into the ceiling, as illustrated in Figure 5. The flexible channel in this area creates a space with a plenum-absorbent bass. This area is full of fiberglass insulation. Low frequency energy can enter through the diffuser and out of the channels into the treated volume. The segmented ceiling requires a wood surface diffuser that is applied to control the vibration echo.

The control room is designed to keep the deader from the studio, about 0.5 seconds at mid-frequency. The walls are faced with 2 “(52mm) fiberglass panels wrapped in fabric.This ceiling is very difficult – two layers of 5/8” drywall hanging from the spring to provide sound insulation through the ceiling on the roof. The bass trap is built into space above the equipment cabinet and into the video cover of the monitor. The windows are arranged in such a way that there is visual contact between the control room and every point in the studio, including isolation.

For a music studio consultation, please fill out the following form or contact us at:

Design Integration Strategy for Optimizing Daylighting and Thermal Comfort in Energy-Efficient Buildings
The Audiovisual Communication and Media Technology Consultants in Delivering High Performance Systems
Audiovisual system is one of the key components in the Education, Business, and Houses of Worship ecosystem....
Alta Integra Wins Design Competition for Mandiri University
Jakarta, Indonesia. Alta Integra Wins Design Competition for Mandiri University.   ASEAN Economic...
Jakarta Air Quality Emergency
According to the World Air Quality Report 2020 by IQAir, public awareness of air quality in Indonesia...
HISTORY AND COMPARISON OF BUILDING ACOUSTIC NOISE RATINGS
Indoor noise ratings have a long history. This evolution began with designing instruments that could...
HISTORY AND COMPARISON NOISE RATING IN BUILDING SPACES
Noise ratings in building spaces have a long history. The first step in this evolution was simply to...
Differences Between Appointing a Consultant and Design-Builder From the Beginning of a Project
Suppose you want to start a construction project. In that case, you may choose between appointing a multi-disciplinary...
Upper-room UVGI system for air disinfection during COVID-19 pandemic
COVID-19 & air disinfection Nowadays, we are facing one of the most challenging times in our modern...
Lesson 7: Reverberation and Echo (201912A)
Lesson 7 Reverberation & Echo Did you ever wonder why sound in big halls decays longer than that...
Lesson 6: Behaviors of Sound in Rooms (201912A)
Lesson 6 Behaviors of Sound in Rooms To create high sound quality for music venues or speech listening...