Contact
Home » Perspective » The Relationship Between the Audio Quality, the Acoustic Quality of Space and the Satisfaction of Enjoying Music

The Relationship Between the Audio Quality, the Acoustic Quality of Space and the Satisfaction of Enjoying Music

On November 29, 2009 I got a rare opportunity to watch Music Odyssey of Addie MS. In accordance with the title of this event tells the story of Addie MS musical journey that started from making a band with Ikang Fauzi, then switch professions into music arranger.

Indra Bakrie who saw the potential possessed by Addie MS encouraged Addie MS to form a classical orchestra that was initially rejected by Addie MS. Because according to Addie MS no one is willing to listen to classical music. But because persistence Indra Bakrie and support friends – friends eventually Addie MS willing to form Twilight Ochestra.

Music Odyssey of Addie MS was initiated by Addie MS’s friends as a form of appreciation for his 30 years dedication in advancing the world of Indonesian music and also coinciding with his birthday.

The concert was held at Plenary Hall at the Jakarta Convention Center. Plenary Hall is actually a round conference room and a large dome-shaped ceiling with a small reversed dome in the middle of a circle. This room has a damping factor to a fairly good echo. Actually this room in terms of acoustics is not worthy to hold a classical music performance. Therefore, from the manager of this concert using an audio system with speaker line array to distribute the sound of music to the audience. 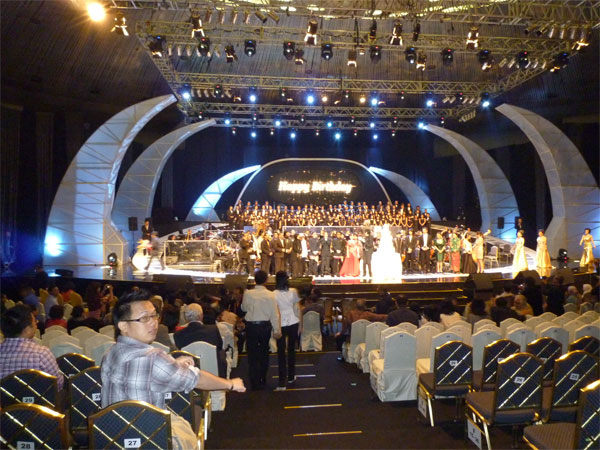 Stage like we see in the picture above starting from the rearmost layer is a row of choir, after that the second layer from the back is a row of orchestra percussion, then in front of percussion layer is a row of wind instruments. In front of the brass instrument layer is divided into 4 parts, namely the left most part is the band musical instrument that the composition of the rear is the drum, electric bass, electric guitar and electric piano. On the right is a band of violin strings (treble). On the right rather fore is the grand piano and the far right is a group of stringed instruments of cello (bass).

The first song I heard was the clear nuance brought by the rising young vocalist named Vidi Aldiano with the piano accompaniment by Addie MS and Twilight Orchestra. The next song is a song performed by Ikang Fawzi, Vina Panduwinata, Memes, Utha Likumahua, Citra Bunga Lestari. It seems that this phase is the phase when Addie MS is working hard on pop music.

After the phases of pop music began to take the music becomes more seriously marked by the appearance of Twilight Chorus and Tiga Soprano Indonesia, then the tenor of Australia. It seems that the composition of the event is quite crowded where the event until 11:00 pm there is no sign of ending. The audience was getting restless and started to go home one by one. There should still be music treats that are prepared as a cover of this musical performance but the audience can not wait to go home because it was too late.

Compare performance that uses audio gain and without audio amplification

It is the dream of all music lovers and audio lovers to listen to the sound of music in the original. One way of listening to music as originally is to listen to classical concerts in concert halls with good acoustics without audio system amplification. So the sound of music that we hear is the sound of the original musical instruments and sounds from the acoustics of the building. Practically the quality of music that we are so determined by the acoustic quality of the concert hall. Unfortunately the JCC Plenary Hall’s acoustic quality does not qualify for a musical performance without audio amplification.

So in this paper I want to discuss the difference between musical performances without audio amplification with music performances with audio amplification. Here are some descriptions of comparison unpublished music performances are real, clear and dynamic without compression. We can enjoy every detail of a flawless sound due to the lack of an audio system. One of the weaknesses of the show without amplification is if the performance space is much noise noise caused by humans and air ventilation systems or machines around the room. The second is that if the show room does not have adequate acoustic quality then the sound quality of the instrument also sounds less good.

While at the music show Addie MS is a musical performance with audio amplification. I feel like listening to the sound of a speaker or an audio system where we can feel the character of the speaker box with the tweeter and woofer characters, the music dynamics are slightly compressed starting from the microfon up to the amplifier. Original music sounds mixed with the audio system’s colouration. While in terms of acoustics I feel the high tone frequency that tends to be absorbed by the damper material contained in this room. It was very difficult for me to enjoy the clarity and clink of piano sounds on the show.

Compare performance that uses audio enhancement with music impressions on home theater devices
The second thing I want to convey to the reader is the difference of this musical performance when I compare it with the sound I hear through a good home theater system.

Only unfortunately in this musical performance I feel the mixing results of each – each channel is less balanced
And less neat. For example, the sound of the piano is sinking compared to the level of the string section, the vocal sound sank compared to the sound of drums and bass. In short my enjoyment in listening to music staged by Addie MS is not optimal due to the performance of audio sounds that are less than optimal, acoustic quality in less adequate space.
Conclusion

We can not ignore audio quality and acoustic quality in enjoying music treats, which can give satisfaction or disappointment to music fans. As Addie MS has said at this concert: “I really crave to be able to present my musical performances in a decent concert hall for Indonesia. But unfortunately Indonesia does not have a decent room for performances of classical music “.
So I write this paper, I hope this paper can be useful for audio fans, home theater enthusiasts, music fans and people who work as professional audio engineer, music director, Event Organizer and so on.

For an acoustic quality consultation, please fill out the following form or contact us at:

Alta Integra Wins Design Competition for Mandiri University
Jakarta, Indonesia. Alta Integra Wins Design Competition for Mandiri University.   ASEAN Economic...
Jakarta Air Quality Emergency
According to the World Air Quality Report 2020 by IQAir, public awareness of air quality in Indonesia...
HISTORY AND COMPARISON OF BUILDING ACOUSTIC NOISE RATINGS
Indoor noise ratings have a long history. This evolution began with designing instruments that could...
Hubungan antara Kualitas Audio, Kualitas Akustik Ruang, dan Kepuasan dalam Menikmati Musik
Akustik  Berkualitas Untuk Konser Musik Pada tanggal 29 November 2009 saya mendapat kesempatan langka...
HISTORY AND COMPARISON NOISE RATING IN BUILDING SPACES
Noise ratings in building spaces have a long history. The first step in this evolution was simply to...
Differences Between Appointing a Consultant and Design-Builder From the Beginning of a Project
Suppose you want to start a construction project. In that case, you may choose between appointing a multi-disciplinary...
Upper-room UVGI system for air disinfection during COVID-19 pandemic
COVID-19 & air disinfection Nowadays, we are facing one of the most challenging times in our modern...
Lesson 7: Reverberation and Echo (201912A)
Lesson 7 Reverberation & Echo Did you ever wonder why sound in big halls decays longer than that...
Lesson 6: Behaviors of Sound in Rooms (201912A)
Lesson 6 Behaviors of Sound in Rooms To create high sound quality for music venues or speech listening...
Lesson 5: Noise Control Performance Indices & Ratings (201912A)
Lesson 5 Noise Control Performance Indices & Ratings In building acoustics, there are numerous noise...