The change of lighting in the city of Rome attracts debates among the citizens. Whether the use of soft golden yellow from a Sodium gas powered lighting or using a rough but bright white light using LED that is energy saving. 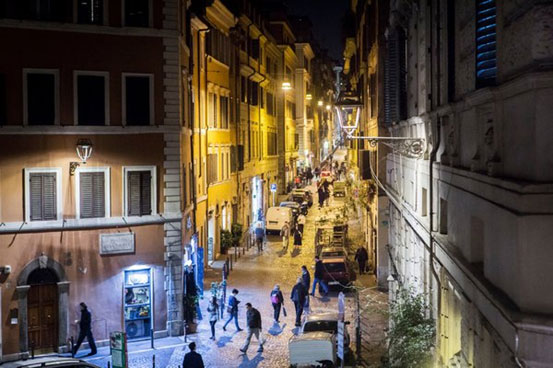 Rome was built and was able to evolve for 2700 years and will always develop. Rome always shows signs of design development of city from time to time that no other cities have. Where the beauty of Rome has a nickname: Beloved, Timeless, Romantic, Beauty.
“Look over there, at that ‘Virgin and Child,’ with that ugly lamp above it, casting such a harsh outline,” said Nathalie Naim, a municipal council member, pointing to a framed image on a wall.

Near the Colosseum, another outrage. “This used to produce a light with a golden halo, that soft and welcoming light that envelops you,” Ms. Naim lamented, nodding to one of the cast-iron lampposts that dot the city center. Alas, no more.
Not everyone is bothered, and to some, the switch is more smoke than light. “It’s how you live the city, not the lighting, that makes it romantic,” said Cosimo Barnaba, the salon manager of a hairdresser just off the main square in Monti.

The atmosphere in the Monti Village with a Modern LED Light. Creates a huge debate in Social Media.
GIANNI CIPRIANO FOR THE NEW YORK TIMES

The decision to change the city’s lighting predates the tenure of the mayor, Virginia Raggi, who has had enough troubles on her hands. Nevertheless, since she took office in June, about 100,000 LED lamps have been installed, just over half the number that will be swapped out in the change, costing 48 million euros, or about $52 million, that is expected to save the city millions in electricity bills.

A white LED streetlight, left, in Piazza della Madonna dei Monti. The streets in the background still have the old sodium yellow bulbs.
GIANNI CIPRIANO FOR THE NEW YORK TIMES

cited from an article by:
ELISABETTA POVOLEDO
MARCH 27, 2017
The New York Times

Design Integration Strategy for Optimizing Daylighting and Thermal Comfort in Energy-Efficient Buildings
The Audiovisual Communication and Media Technology Consultants in Delivering High Performance Systems
Audiovisual system is one of the key components in the Education, Business, and Houses of Worship ecosystem....
Alta Integra Wins Design Competition for Mandiri University
Jakarta, Indonesia. Alta Integra Wins Design Competition for Mandiri University.   ASEAN Economic...
Dilema Desain Pencahayaan Kota: Konservasi Energi versus Keindahan Kota
Perubahan tata cahaya di kota Roma menarik perdebatan di kalangan warga. Baik menggunakan lampu kuning...
Jakarta Air Quality Emergency
According to the World Air Quality Report 2020 by IQAir, public awareness of air quality in Indonesia...
HISTORY AND COMPARISON OF BUILDING ACOUSTIC NOISE RATINGS
Indoor noise ratings have a long history. This evolution began with designing instruments that could...
HISTORY AND COMPARISON NOISE RATING IN BUILDING SPACES
Noise ratings in building spaces have a long history. The first step in this evolution was simply to...
Differences Between Appointing a Consultant and Design-Builder From the Beginning of a Project
Suppose you want to start a construction project. In that case, you may choose between appointing a multi-disciplinary...
Upper-room UVGI system for air disinfection during COVID-19 pandemic
COVID-19 & air disinfection Nowadays, we are facing one of the most challenging times in our modern...
Lesson 7: Reverberation and Echo (201912A)
Lesson 7 Reverberation & Echo Did you ever wonder why sound in big halls decays longer than that...